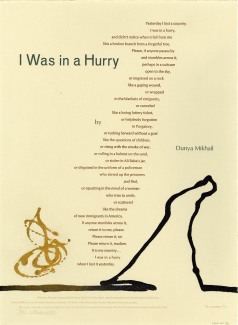 I Was in a Hurry -- Dunya Mikhail

The uprisings in the Middle East and North Africa raise a number of questions for Arabs in Southeast Michigan: Where do our people go from here? How will we fit this spring into our collective history?  In what ways do we maintain an Arab narrative? As Michigan weathers an economic state of flux, what are the implications for Arabs in Michigan? What lessons do these emerging revolutions lend us?

The media has called it everything from “unrest,” “revolution,” and “youth uprising” to “pro-democracy movement” and “Arab Spring.” Regardless, the implications of blooming direct action and social transformation in the Mideast and North Africa are far-reaching. Kareema Alrayashi, a Yemini American Dearborn educator writes, “Even if you weren’t into the politics of the Middle East, and even if the Tunisian Revolution had no effect on you, its domino effect will resonate with us forever.”

As we connect with the Arab world—in surprise, awe, shock, and inspiration—we are only beginning to understand the depth of this transformation and where it may lead. “You would love to say it’s a democratic uprising but we haven’t seen the outcome of it,” says Michael,* an Arab American Dearborn community member.

While the future of the Arab World continues to be shaped, Arabs are affirming that collaborative endeavours, inter-generational spaces, and technical skills can harness strengths that our communities already possess. The lessons that emerge from the uprisings in the Middle East and North Africa reimagine and reshape power.

Children of the Revolution

From Mohamed Bouazizi, whose self-immolation helped initiate the Tunisian uprisings, to calls for action from Egyptian Asmaa Mahfouz, to young Palestinians organizing under occupation: this is an empowering time for Arab youth. Multitudes of youth, armed with technological knowledge, have paired their values and vision with effective communication.

While many of these uprisings are called youth-led, they are not exclusionary. Detroit-based Lebanese multimedia artist Joe Namy explains that even though “the impetus has come from frustration that youth have felt…they can’t do it without support, dialogue, and perspective passed along from elders of the community.”

In Egypt, a whole generation of people have never experienced life without dictatorship. Likewise, children who grew up in Palestine before the Israeli occupation and experienced al Nakba first hand, are now in their mid-sixties. The bonds and disconnections of experience felt between generations of Arabs is as evident in the Middle East and North Africa as it is in the Arab communities in Southeast Michigan.

Dearborn-based Palestinian activist Nour Abed reflects on her family’s origins in a village outside of Ramallah, Palestine. “My grandma has lived in occupation all of her life but she never says anything about it. We are the last generation of the Nakba,” she says. “I taught myself about my culture and my history. Until this day, I’m the only person in this family who is involved. I think they are finally realizing I am never going to stop.”

Abed works with youth in Dearborn and Detroit and organized a successful Gaza fundraiser in February. “When I work with them, I feel closer to Palestine.”

The role of the Internet in these social transformations is undeniable. What is equally significant is that Arabs are representing themselves.  Since our story is not always told, or told by us, a self-defined Arab narrative has become sacred. “We’re actually becoming part of the media. That’s the only way in which we are able to transform the image—by creating it ourselves,” says Namy, who is the co-director of the Future City Media Workshops, a project of the Detroit Digital Justice Coalition.

Amidst a slew of news outlet bans in certain Arab nations, coupled with the violence perpetrated against journalists, media outlets have turned to everyday people, citizen reporters, to give coverage, insight, and analysis of these revolutions.

Long-held Orientalist perceptions of Arabs are still prevalent as another wave of anti-Arab and anti-Muslim sentiment and hate crimes washes over the States. At the same time we are seeing another image of Arabs emerging—the inspiring, collaborative, “democratic” Arab.

Two representations of Arabs—the dangerous and the democratic—have gained momentum. As class politics in the US, particularly in the Midwest, begins a long overdue illumination, Arabs are being recognized as inspirational and revolutionary. While this shift is notable, applying labels and an “inclusion” of Arabs amongst revolutionaries implies a power dynamic. Who exactly decides who our heroes will be and how history is framed. Why is it these people who are “choosing”? Arabs have been revolutionaries long before CNN or public sector workers in Wisconsin deemed them so.

Damaging depictions of Arabs, discrimination and hate crimes still persist. Recent call outs by the NAACP, CAIR (Council on American-Islamic Relations), the Southern Poverty Law Center, and communities around the country, have responded to the national increase in hate crimes: anti-Muslim crimes surrounding the New York Islamic Center, anti-Muslim protests at a fundraising event for women’s shelters in Orange County, and the shooting of two Sikh men mistaken for Muslims in California. Meanwhile, US Representative Peter King’s March congressional witchhunt of the Muslim and Arab community moved forward.

More recently, US Senator Dick Durbin’s hearing on “The State of Muslim Civil Rights in the US” called attention to the discrimination faced by Arabs, Muslims, Sikhs, and South Asians.  Profuse with hate crime statistics, the hearing applauded the efforts of the Department of Justice in processing these complaints. Yet Durbin failed to acknowledge the role this department (and the Department of Homeland Security) play in furthering discrimination and intolerance through racially targeted policies and strategies since 2001.  Currently, in Michigan, CAIR has announced the filing of official complaints by Muslims and Arab Americans with the DHS and the Department of Justice for repeated detention, abusive questioning, and inappropriate searches at the US-Canadian Border.

“I would never look at something someone does and blame their whole society and their religion,” says Michael*. “It’s like we have to suffer twice.” Children learn to recognize these prejudices early on. As Hawraa Hakim, a Lebanese-Iraqi college student writes, “Most children’s [TV shows] deal in absolutes, reinforcing the idea that people are good or bad, stupid or smart.  [We] latch onto the stereotypes that we see.” Fatima,* a Dearborn middle school student explains, “They judge us too easily. They think we can’t even get along with each other and that they don’t have to get along with us either.” For many Arabs and Muslims in Michigan, this pain runs deep. Abed adds, “I am a Palestinian Muslim. I will never be accepted as American.”

As people of color, we need a critique of violence within our communities. Arabs and Muslims are placed on all sides of the “war on terror” equation. We are encouraged to seek military jobs that perpetuate occupations and US terrorism against our homelands. As in many communities of color, military recruitment is rampant at community events, particularly in low-income areas of Dearborn, where the allure of the armed forces is pitched as a viable path to economic stability.

From Fragment-Nations to Transforming Communities

As the Dearborn community watches closely the transformations in the Middle East and North Africa, there are unique struggles and privileges Arabs in Michigan face.  Though we have the (relative) safety of living in Michigan, it is difficult to watch the the uprisings take hold while mass violence is perpetrated on family members in the homelands. Fatima* has cousins in Yemen and an uncle in Libya. “He could not sit there and just watch. He had to do something. It was killing him inside.” Her father Michael* adds, “I’m not even going to attempt to say I know how they feel. I’ll never say that. It’s really sad—the tragedy they face because of stepping up.” With difficulties in communication, the safety of their family members often remains uncertain.

A community that deals with pain often deals with considerable trauma as well. There are significant immigrant and refugee populations in Southeast Michigan that come from war-torn or occupied countries. Processing that trauma is a long journey. Reflecting on how she turns anger and sadness into a productive process, Abed replies, “Music and hip hop. Music is something the government and dictators can never take away from us.”

People all over the world watched Tahrir Square in real-time. Our interconnections grow through shared experiences of power shifts and struggle. We have an unprecedented ability to inspire each other now. Even though what has happened so far is significant, this is only the beginning of a long road of changes.

As we call upon skills we currently harness and foster collaborative endeavours, as we support inter-generational spaces and re-imagine power, is it really that revolutionary to think the tools we need for radical transformations already exist within our communities?