CM: Why this title for your collages? Are these places in Detroit people can’t see? 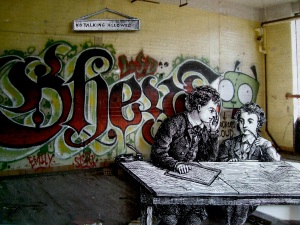 NM: The title is taken from photographer Eliot Porter’s book about Glen Canyon (Glen Canyon: The Place No One Knew)—a once-amazing area in northern Arizona flooded for hydroelectric dam construction. By the time Porter’s book was published (1963), the canyon was already submerged and only existed in photos.

Detroit in some way feels similar. As the city changes—as we tear down buildings and schools, develop small pockets and leave larger areas crumbling—already my pictures from last year show a different place, so many things are gone.

Not all of this change is bad of course—as neither was (one could argue) the Glen Canyon dam. But it does make you want to capture the city before it changes.

CM: So the title is mainly in reference to areas in Detroit disappearing?

NM: That and also the idea of learning to see what is here—what makes these places interesting and unique. Detroit is demanding, if you don’t look and appreciate the city from an alternative point of view, you may miss it.

CM: Could you talk about making the collages?

NM: They are mostly three-dimensional, some with several layers, combining contemporary images of Detroit with cut-out images of people from the past. Like most collages, when you put disparate things together, new implications emerge.

The contrast should make you pay attention to both subject and surroundings in a way that you wouldn’t without the time lapse. My intention is that viewers will wonder about the people in the collages—both as they existed in the past, and in their current surroundings.

CM: What about the role of nature? Especially with ‘Christina in Brush Park’. Some of the pieces with animals only and no humans?

NM: It’s problematic—focusing on nature in the city. It’s often touted as a  privileged idea, that nature with it’s wild tameness, will save us from our social ills. But who will organize this ‘nature’? What neighborhoods will be moved in order to provide for it? In Detroit, this criticism is directed at those promoting the idea of urban forests filling empty spaces, or urban agriculture filling an empty work force. “Untamed nature” is also routinely used as a means of promoting the idea of land as a wilderness and uninhabited —and therefore yours to discover and conquer!

Even so, I’m continually drawn to the idea of nature in unlikely places—in both life and art. I find myself taking pictures of hawks circling the Majestic Theatre and thickets of wildflowers in empty lots—whether or not I necessarily ‘agree’ with it being there—or whether I necessarily know if it is beautiful or not.

CM: So your collages are an attempt to reflect some of this beauty, if it is beauty?

NM: Yes, and also, an attempt to emphasize an area by giving attention to it. Taking pictures is a way of acknowledging something exists and saying it is worth looking at. It matters. 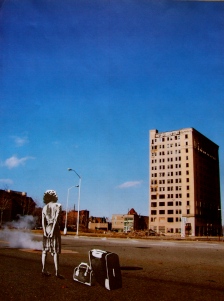 Stay at the Eddystone — Nicole Macdonald

NM: Too much of anything (no matter how interesting, like ruins) can become redundant. To pull a subject out of redundancy it has to be taken out of it’s familiar context. With these collages, I’m attempting to treat ruins as though they are not ruins. These added figures and/or animals now regard their surroundings as nothing out of the ordinary.