Detroit poet Will Copeland shared with Critical Moment a reflection written in remembrance of his friend, David Blair. This was written on August 1st, the day after a memorial for Blair was held at the First Unitarian Universalist Church of Detroit to celebrate his life. 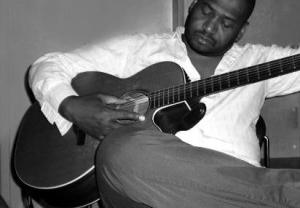 The day after the Memorial Service for Blair, I’m still trying to hold, remember, and incorporate the various stories I heard about Blair. What struck me was the number of people that said “Blair was my best friend.” I knew Blair as a fighter for racial and social justice, but I was floored by the variety of stories of Blair taking vocal, symbolic, public, and community leadership. He helped crowds stand in the face of racial violence. He stood up against workplace exploitation. For decades, he traveled among groups of working, queer, Black folks and was respected as a spokesman, struggler, and leader. If that was not enough, in the last ten years he made a great leap towards his own humanity and dedicated his life to art. He saw that making a living was not sufficient, even though he was so highly respected wherever he chose to make a living. He wanted to learn more about the human condition and communicate it through artistic processes. Blair was lamented not just as an artist but for his potential as a leader in the past and present and also the future when our times become more revolutionary.

He stood as a groomsman and sang at my wedding but I learned how he wrestled with the homophobic nature of modern marriage and was making a vow to not participate in any more weddings. I learned how many other people were in his family and still invited him to stand with their closest loved ones on these momentous days. It was so amazing to hear how many people held Blair close to their hearts. I now listen to his poems and recognize the steel, the hardness, the labor that he portrays coming from Black men. There’s a saying in the Black community that “Steel Sharpens Steel.” This refers to how men hold each other accountable and manhood (as opposed to boyhood or malehood) includes deep notions of growth and accountability. This is a grinding process, a beating, a melting. I’m sure that the notions of masculinity he faced in our community caused Blair great pains in many ways. But in so many ways Blair took those notions and infused them with a respect for women, a love for children, an honoring of integrity, emotion and life experiences.

Blair was a complex man, but overall Blair was a man. In numerous conscious circles, Black activists bemoan the feminization of younger (post-1960’s) generations saying “They are trying to weaken the Black man and make him gay.” The tributes and memorials to Blair showed a complex blend of strength and weakness, masculine and femininity, queer identity, emotion and action. I think that these arguments about the feminization of Black men in American culture should be discussed in our communities. But right with this discussion should include testimony to the fierceness of Blair and how he exhibited for us all to see so many qualities of what it is to be a Black man in the 21st century. If you can’t respect the fact that he is a gay man, your loss, your dogma, your blindness. To paraphrase Ossie Davis, David Blair is our shining manhood. Like he said in the Little Richard poem, these kids today are a pebble. The superficiality of adolescent media culture is a pebble. Selfishness, isolation and the “I gotta get mine” attitude is a pebble. David Blair wrestled with the rock of manhood. He fully carried its burdens for himself and his community. Ashe Ashe Ashe