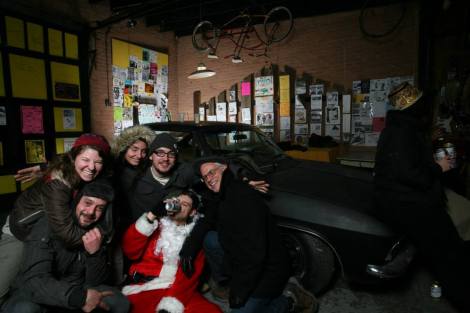 On the eve of what would prove to be a seemingly never-ending snow season, the Critical Moment Collective held a holiday fundraiser on Friday December 13th at the Trumbullplex. The night was filled with stellar performances by supporters of the paper. Performances started off with the solo folky guitar stylings of JBruce38, followed by a generous helping of Fuzzy’s recipe of ukulele and original song work. Patience Young followed with some heartfelt poetry reading, which incorporated our friend the ukulele as well. Critical Moment’s own Fred Vitale took to the stage with his band Poor Player to bring a more familiar sound to the Trumbullplex stage, as did Insurgency to close out the night’s acts. DJ Brian James Hill finished off the night, providing tunes to dance our way home. There was a special appearance by none other than Old Saint Nick himself, who showed off some moves he’s perfected in the North Poll’s dance outfits.

The Critical Moment Collective would like to send a big thanks to all of our fans and supporters. Thanks to your generosity, we were able to raise nearly $600 to help with printing costs for the paper – our only expense and where 100% of money raised goes. It’s because of you we’re able to keep this thing going.

The next Critical Moment fundraiser will be held on April 1st. You’d have to be a fool to miss it! Keep an eye on our website or facebook page for further details – http://www.critical-moment.org & http://www.facebook.com/criticalmoment1.