Pistons were grinding and gears were turning in the plants of Detroit’s automotive factories.

The world looked to Detroit as a place of wonder that represented the peak of the industrial era. Mass production was no longer merely a means of simplifying tasks once done by manual labor — it was a new way of life being exported for a global population. Automobiles meant that Americans could travel down unseen winding roads, could reach the unreachable; imagination could be surpassed by experience. The opportunity this presented lead thousands to this city to find work. They left miles and continents behind them to be a part of the industrial revolution. But along with the wave of immigration to Detroit, traditions and secrets of the Old World quietly settled like a change of seasons in the homes of many who brought with them magic and witchcraft.

Hidden on St. Aubin Street on Detroit’s east side, was a charismatic Italian healer who honed his own brand of voodoo. Benedetto Evangelista regularly served many members of the Italian immigrant community. In 1926, he wrote a 200-page bible of his own titled “the Oldest History of the World: Discovered by Occult Science,” which proclaims it was written by Evangelista “only between the hours of 12 a.m.–3 a.m.,” while he was receiving visions dictated by an amalgamation of Christian biblical figures and fictional deities. Based on this bible, he formed a cult which he dubbed the Great Union Federation of America. Services were held at the St. Aubin home. Italian immigrants from all over the midwest followed his religion and sought the remedies Evangelista prescribed at a small fortune. Within three years, Benedetto Evangelista’s voodoo cult had built a steady clientele of patrons.

But on July 3rd of 1929, a friend found Evangelista at his home beheaded, he and his family were victims of a grisly and bizarre massacre. The family of six — daughters Eugenia aged 4, Margaret aged 5, Angelina aged 7, wife Santina, and son Mario aged 18-months — butchered with an axe and all beheaded. Left behind were no explanations, but a morbid trail of occult mania that only got more confusing with each development. 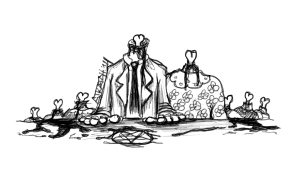 Through investigation the police found a series of notes and coded death threats that seemingly counted down to Evangelista’s death, but a source was never pinpointed. An extremely large altar in the basement to Evangelista’s fictional deities was found along with voodoo paraphernalia and photographs of corpses but Benedetto Evangelista’s normal life was just too strange to illuminate anything out of place.

In 1932, Robert Harris, a leader of another voodoo cult in Detroit with over one hundred members, confessed to murdering Evangelista. Harris had previously been found guilty of brutally stabbing a man named James Smith in the heart atop a sacrificial altar for refuting his religion. Police had every reason to believe Harris was capable of committing the St. Aubin Massacre; they had a confession, a pattern and a motive. How likely was it that the two separate voodoo-cult-related murders had nothing to do with each other? But just to add to the labyrinth of confusion that surrounds the deaths of the Evangelista family, fingerprints did not match the crime scene. Eighty-five years have passed and the St. Aubin home is no longer standing, but the terrible murders of the Evangelista family remain a mystery.

The St. Aubin Massacre as strange as it was, was not the only paranormal conspiracy making headlines at the time in Detroit. Two years after the Evangelista family murders, one of Detroit’s most notorious serial killers was tried for murder. Not only was she a woman, but she was also a self-proclaimed witch. 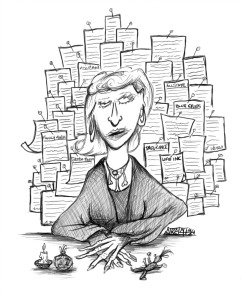 Hungarian immigrant Rose Veres was age 48 when she was tried for the murder of 68 year-old Stephen Mak, who was pushed from a ladder at her boarding house on Medina Street in Delray. The first witness willing to testify against Veres was an 11-year-old named Marie Chevalia, though the entire neighborhood knew Veres to be dangerous for a long time.  According to the Detroit News, Veres had taken out insurance policies on nearly every boarder that stayed at her home, and when questioned, she told police that it was protocol in Hungarian boarding homes.

The death of Stephen Mak was actually the seventh death that neighbors suspected Rose Veres committed but they were all terrified of her prowess in witchcraft. The Hungarian population of Delray was one which had invested a lot of fear in the notion of magic and hexes. Veres thrived off of her neighbors’ fear in order to prevent witnesses from coming forward, telling them that she was a shape-shifter and threatening with the evil eye. At least one inexplicable death occurred after Veres threatened with hexing, and neighbors claimed to have seen her shape-shift into a beast on dark nights.

In the end, Veres confessed to just one of at least twelve murders she was believed to have committed in her House of Horrors, but she was exonerated in 1945. Veres may have been a ruthless mercenary and murderer but what drew the most fear and mention from headlines was her nickname, “The Detroit Witch.” In a city where we had mastered the science of technology, the unexplainable caused a frenzy.

Detroit is famous for a legacy of innovation and industry which had an integral role in national progress. But a shroud of mystery covers the nuanced local histories where neighborhoods were harboring dark secrets full of the archaic practice of magic. Hidden in the shadow of a new metropolis were witches, prophets and murderers—and there are surely more skeletons yet to be discovered in Detroit’s closet.

Disclaimer:  the use of the word “voodoo” is definitely not the correct usage. It was used in conveying what the articles and micro-film from the time presented in a string of events known as “The Voodoo Murders”. The religions represented in the narrative were fictional, nevertheless described by mainstream newssources as “voodoo”, out of ignorance.