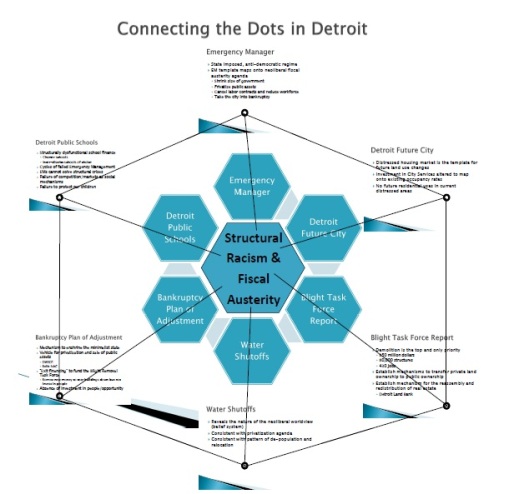 The graphic demonstrates the important connections among the Bankruptcy Plan of Adjustment, Emergency Management, Detroit Public Schools, Water Shutoffs, Future Detroit and the Blight Task Force.  They are all facets of Structural Racism and the Policy of Austerity. The slides are from a presentation by Dr. Peter Hammer, professor of law at Wayne State University and director of the Damon Keith Center for Civil Rights. Called “Connecting the Dots,” it was first presented at Blessed Sacrament Cathedral in September. Since the presentation, there have been important developments on all six fronts of struggle.

The purpose of the Bankruptcy trial is to decide whether Detroit’s Plan of Adjustment (in its 8th edition by attorneys working at $1000/hour and 441 pages long) is an acceptable plan for Detroit to emerge from bankruptcy. The plan should, in the eyes of Federal Judge Steven Rhodes, prevent Detroit from being bankrupt again and allow Detroit to provide basic city services despite the fact that there is nothing in the plan about creating jobs. Without money coming in, exiting bankruptcy will be near impossible if the current 40% unemployment rate continues. Court testimony reveals how much we have lost and how much we are losing to pay off the banks on questionable loans.

Kevyn Orr, Emergency Manager of Detroit, testified that his biggest reason for taking Detroit into bankruptcy was the money owed city workers and retirees for non-pension benefits, primarily health care.  According to Orr, the city had underfunded these benefits by $5.7 billion. Pension underfunding, was actually much less, $3.5 billion. Under threats of deeper cuts, employees and retirees approved the Plan by accepting less severe cuts, no health care and by dropping a lawsuit against the EM law. Orr testified that the health care cut was by far the biggest “savings” to the city through the bankruptcy.

The same week, a federal judge in California ruled that in the municipal bankruptcy of Stockton, California, pensions could be reduced like any other debt in bankruptcy. It was a sharp blow to the California state pension systems elevates the attack on public employee pensions across the country. It also underlines the importance of Detroiters continuing to resist these anti-worker policies.

John Hill, Chief Financial Officer for Detroit, testified that $1.2 billion of the $1.4 billion earmarked to improve city services comes from “efficiencies” in city services and collecting more taxes. Detroit Free Press reporters Matt Helms and Tresa Baldas wrote: “Detroit clearly will be walking a tightrope in meeting terms of the Plan of Adjustment, with court monitoring and state-imposed oversight through a financial review commission that could last 13 years or more. The commission would have ultimate say-so over spending and contracts city officials approve.”

Federal Bankruptcy Judge Rhodes said that he approved Detroit entering bankruptcy because the city could not deliver basic services to its residents and pay its debts.  Now we learn that the Plan has little new money. $1.2 billion arrives – magically – from cutting costs and improving collections of taxes.  In other words, to the extent that the plan is successful, Detroiters will bear the costs doubly – key city services will be reduced and residents will pay more taxes.

Mayor Duggan also testified about the Plan of Adjustment. He claimed that the Plan was reasonable but expressed concern about things beyond his control: “I can’t predict a national recession. I can’t predict a cut in state revenue sharing. I can’t predict other casinos being approved. Those are the risks I signed up for as the mayor. I believe within this plan are the resources we need to be successful.” Commenting on the fact that the plan depends largely on more efficient collection of funds by the city, Duggan said, “this is going to be tight, and it’s not without risk.”

The Bankruptcy Plan – deep cuts of wages and pensions, seizing city resources and giving them to banks and financial institutions — will not improve Detroiters’ lives. Such plans have an unsavory history around the globe by not helping people improve their lives anywhere. The assumptions of Orr and Snyder that poor leadership, bad decisions and corruption by Detroit’s leaders are the causes of our financial problems are a falsehood. The causes instead are structural racism, fiscal austerity and enormous job losses. The plan does not address any of these real causes.

The city started an aggressive water shut-off campaign in the spring of 2014 in an effort to get more people to pay their outstanding bills. Rhodes called the efforts a “bold, commendable and necessarily aggressive plan,” because “Detroit cannot afford any revenue slippage.”  He conceded that, “It cannot be doubted that water is a necessary ingredient to sustaining life, but that doesn’t mean there is a right to free and affordable water.” Rhodes said residents do not have a right to receive water service “let alone service based on an ability to pay.” Nearly 22,000 homes lost water due to shutoffs from March through August, according to the Detroit water department, though 15,251 had service restored in that same period. A moratorium on shutoffs demanded by grassroots organizations is a bad idea, says Rhodes. “The last thing Detroit needs is this hit to its revenues.”

The Great Lakes Water Authority (GLWA), another misshapen creature born of the Bankruptcy Plan like the new Lighting Authority, has seized key components of the Detroit Water System: intake plants, treatment plants and large interceptors that connect with suburban systems. The GLWA Board will be stocked with political appointees selected by county executives, the governor, the mayor and Detroit’s City Council. The appointees will know nothing about water and water systems and will not respect the human right to water. They are already ignoring the needs of low-income people.

The situation in Detroit may be a disturbing sign of things to come in the United States. In 2013, the US Conference of Mayor raised an alarm that the high cost of necessary local government investment in aging water infrastructure and services in many cities disproportionately affects elderly, poor, and middle class households. According to its research, public water spending between 2001 and 2010 topped $850 billion, largely financed through water rate hikes and increased long-term borrowing. They also lamented that the burden of higher charges “borne disproportionately by households with low, moderate or fixed incomes” because a greater share of their income is spent on necessities like water. They called for “a fresh look at local affordability and a national water policy.” No such fresh look is occurring in Detroit.

At the request of local and national grassroots organizations, two Special Rapporteurs from the United Nations; Catarina de Albuquerque, Clean Water and Sanitation Specialist; and Leilani Farha, Adequate Housing Specialist, came to Detroit October 18-20 on a fact-finding mission. (See their statement on pages 6 and 7.)

Kevyn Orr, the EM over Detroit, reached an agreement with Mayor Duggan and Detroit City Council in late September to leave office as his term ended. Nevertheless, he will remain to “handle” the Bankruptcy and Plan of Adjustment. The city budget will be controlled by Kevyn Orr until the trial ends and the state financial board takes over for the next 13 years. Orr, it should be noted, issued several recent orders including the reorganization of city government in the image of the Bankruptcy Plan and overriding the Detroit Charter, the revised city constitution recently approved by voters.

Following the vote to remove Kevyn Orr, the Detroit School Board voted to terminate the third Emergency Manager over DPS, Jack Martin. Not surprisingly, he refused to leave. Ingham County Circuit Judge Joyce Draganchuk ruled the state has the right to appoint EM after EM as long as the governor deems necessary. There is, in fact, no guaranteed return to democracy for schools or cities.

The Bankruptcy Plan includes seizing valuable Detroit assets in order to appease banks and financial institutions. Two of them, Syncora and Financial Guaranty Insurance Company, had provided insurance for the loans, likely illegal, made in 2005, ostensibly to make payments to the pension funds. In order to end their opposition to the Bankruptcy Plan, Syncora agreed to take some of our parking garages, the Windsor Tunnel, riverfront land to the east of Woodward and cash. FGIC agreed to take riverfront land west of Woodward – Joe Louis Arena and cash. It also agreed to build a hotel, expensive condos and shops on the property. In addition to ceding this valuable riverfront land, the city also is on the hook to demolish Joe Louis Arena to prepare the land for the FGIC. The billionaire Mike Illitch will move the Red Wings hockey team out of Joe Louis Arena by 2016 into his new stadium, built on city properties he obtained for one dollar.

Instead of providing homes to the thousands of homeless, including the tens of thousands who are losing their homes through foreclosures, the Detroit Land Bank has been auctioning homes that buyers are responsible for rehabbing. Many of the individuals who are trying to buy homes cannot get mortgages from banks and the homes are returning to the auction block. Instead of a Blight Task Force that destroys homes, Detroit needs a Rehabilitation Task Force that finances programs to keep people in their homes, teach necessary and marketable skills and grow viable communities.

Fred Vitale is active in Detroiters Resisting Emergency Management, Green Party of Michigan and Michigan Welfare Rights Organization. He is also an editor of Critical Moment.