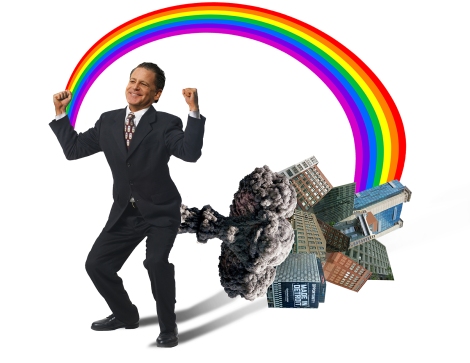 Realizing that the real scam potential was in loan originations, Dan the Man shifted from selling real estate to founding Quicken Loans in 1985, and has grown it into the nation’s largest online lender. Part of Quicken’s successful business strategy can be found in their policy of profiting from the sub prime mortgage crises and collecting $500 non-refundable application fees from borrowers with no hopes of securing a loan. In 2010, the vulture mortgage company moved its cultish headquarters and 1,700 overworked employees to downtown Detroit where they still enjoy a high 70% turnover of new doe eyed recruits. The source of most of his wealth, Quicken saw explosive growth in 2012, closing $70 billion in loans, up from $30 billion in 2011. Former employees report their best day was their last.

With an estimated net worth of $3.9 Billion, Dan finds himself on the Forbes list of the 400 most worshipped hoarders worldwide, and this jaw dropping balance also makes him metro Detroit’s wealthiest citizen. Dapper Dan is a married man who makes his home next to Scrooge McDuck in Franklin, MI. He celebrated his 52nd birthday on Jan 17th with a swim in his indoor pool which was filled with the tears of scammed borrowers and deceived workers.

Number of billionaires in Michigan : 11

Number of Michigan billionaires who have done jail time : 2

Detroit’s deficit, in billions, according to Emergency Manager Kevyn Orr : 18

Estimated net worth of world’s wealthiest individual, in billions : 73

Number of years it would take to give away one billion dollars at the rate of one dollar per second, nonstop : 31